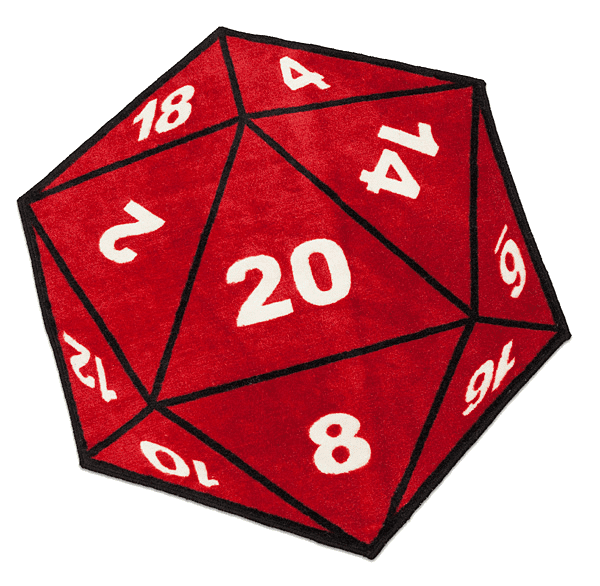 The twenty-sided die (d20) is at the heart of Level Up’s action resolution mechanic. To make an attack, ability check, skill check , or saving throw , players roll a d20 and add their relevant modifiers. Apply any bonuses and penalties, and compare the total to the appropriate difficulty rating (Armor Class, Difficulty Class, and so on). If the total equals or exceeds the rating, the roll is a success. Otherwise, it’s a failure.

Sometimes the Narrator will call for a group check. Group checks take place when the entire party is engaged in a single task, such as climbing a cliff or sneaking up on an enemy camp. The more skilled members of the group are able to help the less skilled members.

Critical Successes. A natural 20 on an ability check or skill check  is a critical success so long as the creature attempting it would normally have succeeded on the check. For example, a baby goblin could never break out of steel manacles using Strength but an adult warrior goblin might. On a critical success the objective of the check is achieved and something else happens as well.

Critical Failures. A natural 1 on an ability check is a critical failure so long as the creature attempting it would normally have failed on the check. On a critical failure, the objective of the check is failed, and something unfortunate happens as well.

Criticals and fumbles also provide opportunities for additional positive and negative consequences. For example, in addition to being a guaranteed success, a critical hit increases the damage caused by an attack (dealing double damage). At the Narrator’s discretion, a fumble might also result in a complication for the attacker, such as their weapon getting stuck in a wooden door, requiring an ability check to free it.

There are two ways that a creature's chances of success can be increased or decreased.

When you have both advantage and disadvantage (regardless of from how many sources), they cancel each other out and you roll normally.

Some class features or traits grant you an expertise die for an attack roll or saving throw , or in a specific skill or tool proficiency. When you make a d20 roll with which you have gained an expertise die, roll 1d4 and add the number rolled to the result of your check.

While advantage is most commonly used to represent circumstantial factors affecting a situation, expertise dice typically represent the particular training a character takes into the adventure.

Unless noted otherwise, when rounding in Level Up you round down.

The rules of Level Up presented here are designed to provide a supportive structure and foster an enjoyable environment for play. Rules provide guidance, clarity, and a common framework so everyone playing the game can be on the same page.

Even so, rules disagreements can still pop up from time to time. At any given table, open discussion is valuable and encouraged, but getting too caught up in a debate about the rules can bring a session to a screeching halt. By providing custom or house rules and safety tools to players prior to the start of play, the Narrator can set expectations ahead of time and help avoid problems at the table.

But even with preparation, a Narrator might still need to make an on-the-spot ruling when a rule is contested or can’t easily be referenced without interrupting the flow of play. To aid with this important responsibility, Narrators can make a one-time ruling that takes precedence over any official or unofficial rules, as long as it enhances the fun for everyone at the table.

Looking For The Main A5E Site?

Level Up: Advanced 5th Edition is an "advanced", standalone version of the 5E ruleset. It adds more customization and depth to the game. A5E is 100% compatible with 5E, however, it is a core ruleset. It includes everything you need to play.

This is an OPEN BETA toolset, and is a work-in-progress. Content, appearance, and functionality are continually being added and tweaked. This is all part of the process. Please be patient!

Open Gaming Content can be found in the separate System Reference Document, available to download as a PDF. This online toolset is not the SRD.